Intelligent Design: The Good, the Bad & the Ugly

by Stand Up For The Truth | Mar 27, 2019 | Apologetics, Christianity, Creation, Podcast, Worldview 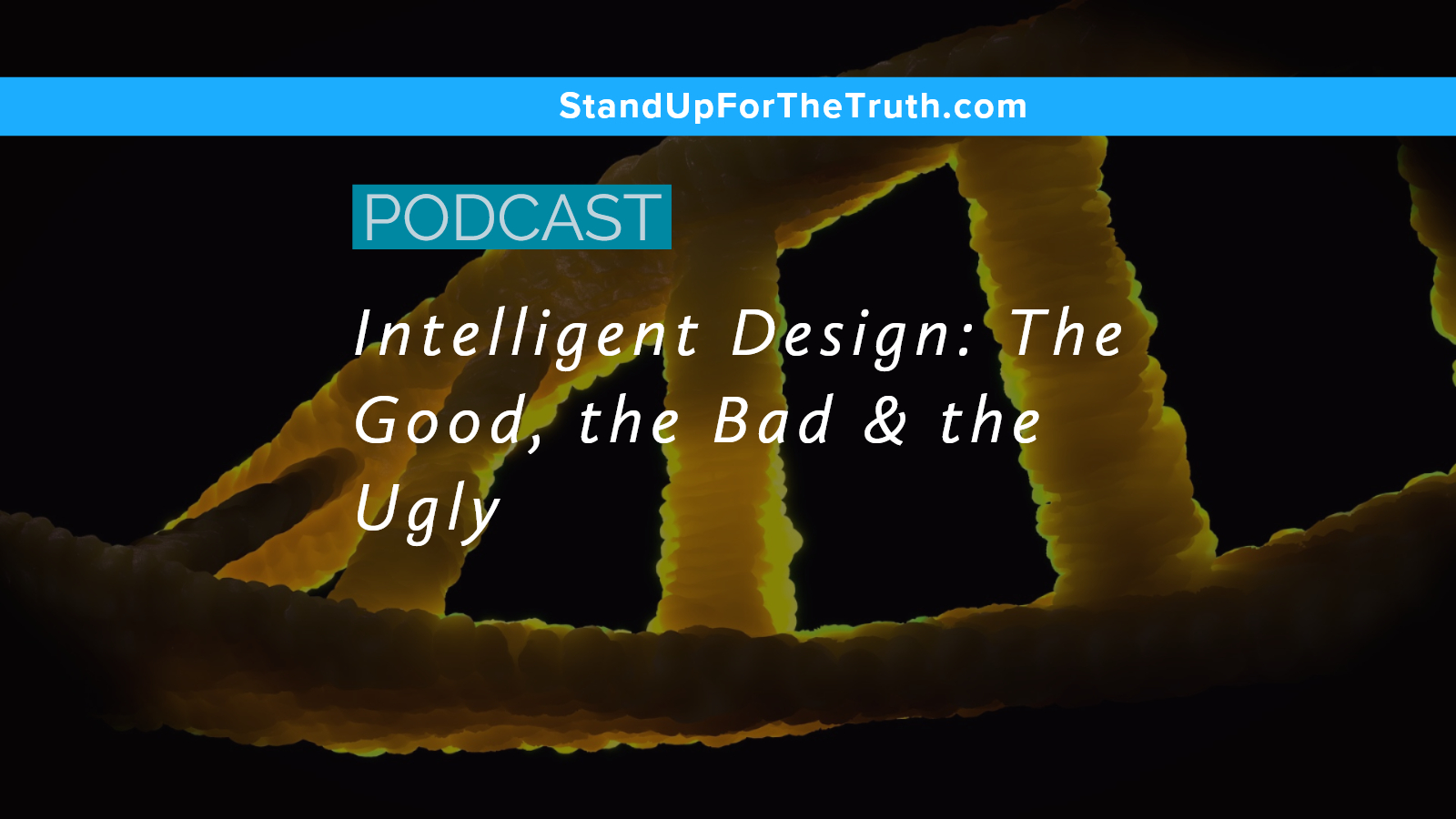 Most people have heard of the idea of “Intelligent Design,” but there’s a lot of confusion and misinformation out there regarding this concept.  On today’s podcast, we cover three areas such as defining Intelligent Design, and looking at the positive attributes as well as some of the concerns. Author and international speaker, Jay Seegert (The Starting Point Project) is back with us today to discuss Intelligent Design and to take a fresh look at Genesis from the perspective of creation. Did you miss Jay’s live broadcast this month? Click here for YouTube video. Genesis Flood: Fact or Fiction? SCRIPTURES:

For since the creation of the world His invisible attributes are clearly seen, being understood by the things that are made, even His eternal power and Godhead, so that they are without excuse, 21 because, although they knew God, they did not glorify Him as God, nor were thankful, but became futile in their thoughts, and their foolish hearts were darkened. 22 Professing to be wise, they became fools, Romans 1:20-22

For since the fathers fell asleep, all things continue as they were from the beginning of creation.” 5 For this they willfully forget: that by the word of God the heavens were of old, and the earth standing out of water and in the water, 6 by which the world that then existed perished, being flooded with water. 7 But the heavens and the earth which are now preserved by the same word, are reserved for fire until the day of judgment and perdition of ungodly men. 2 Peter 3:4-7 By faith we understand that the worlds were prepared by the word of God, so that what is seen was not made out of things which are visible. Hebrews 11:3 The heavens declare the glory of God, and the sky above proclaims his handiwork. Psalm 19:1

1. In a general sense, knowledge, or certain knowledge; the comprehension or understanding of truth or facts by the mind. The science of God must be perfect.

This most beautiful system of the sun, planets, and comets, could only proceed from the counsel and dominion of an intelligent Being. […] This Being governs all things, not as the soul of the world, but as Lord over all.

For more on Intelligent Design, check out Jay’s book: Creation & Evolution: Compatible or in Conflict? “Do the questions of creation, evolution, and the Bible seem to be too complicated and confusing? Whatever your stance on this issue, you will find Creation & Evolution to be both interesting and easy to understand.” The claim is often made that living in an age of modern science makes it intellectually impossible to accept the straight-forward Genesis account of creation. Creation & Evolution reveals that biblical Christianity presents the only worldview that consistently and accurately explains observations made of the world in which we live. Believers will have their faith greatly strengthened, while skeptics will be graciously and seriously challenged.” It has been stated by some of the leading Creation scientists that this may be the best overview of the creation/evolution controversy available!