by Stand Up For The Truth | Nov 21, 2019 | Christianity, Podcast, Social Justice, Teaching, Theology 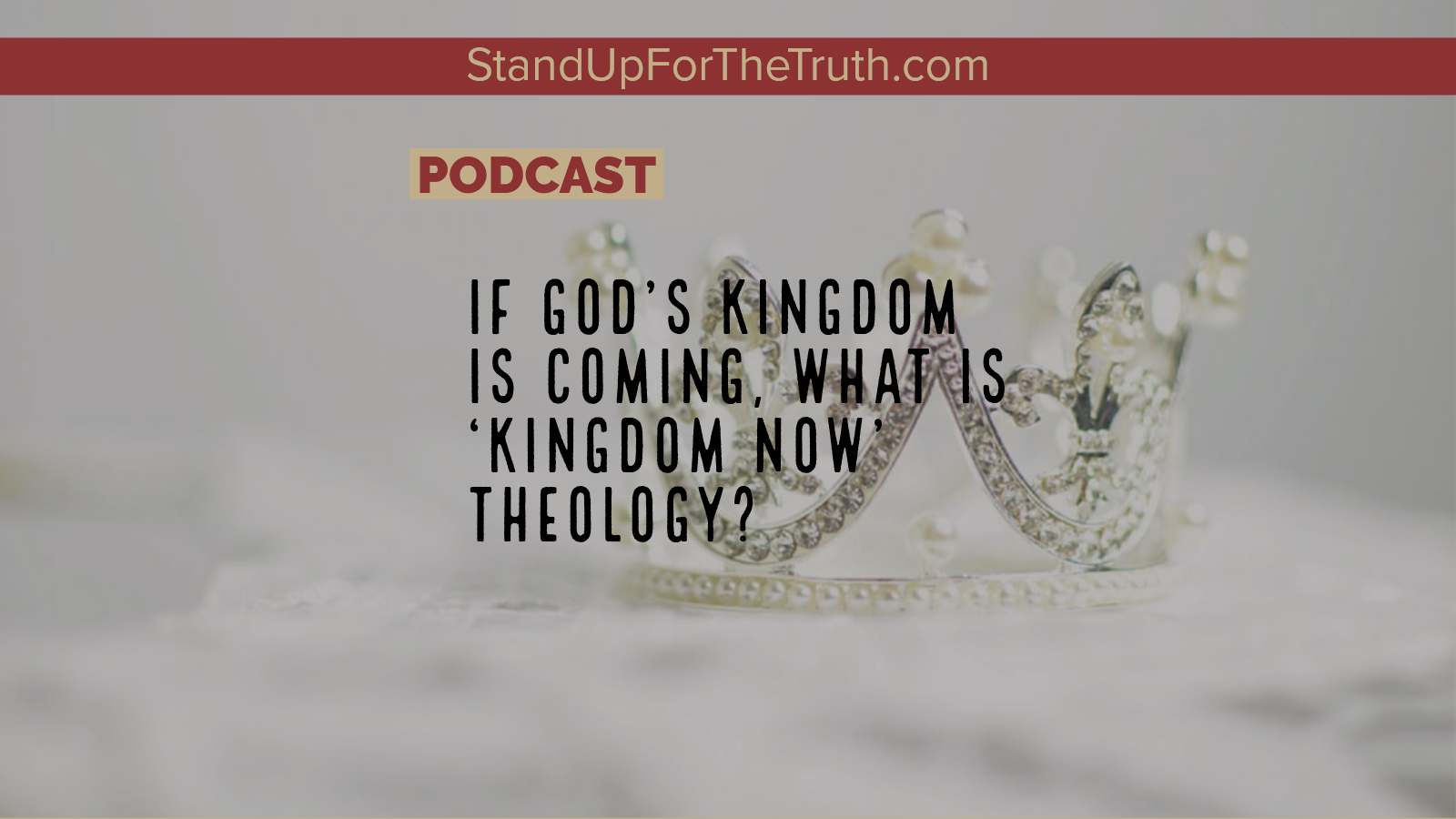 The kingdom of God will be the future time in history when Jesus Christ, the Last Adam, will return to planet earth victoriously, and after judging an ungodly world, He will set up His kingdom that will display God’s righteousness in every area of life. It’s at this time that Christ will put on display a godly culture and social structure within the world.

Since it’s important to address subtle deceptions in the church (and some not so subtle), we’re going a bit deeper today to tackle a teaching that affects what Christians believe about the kingdom of God. But many do not realize it. A few questions we’ll answer are: If the kingdom of Jesus Christ is coming soon, what do we do with our time here on earth in terms of working for the Lord’s purposes? And what exactly is ‘Kingdom Now’ theology?

“Understanding this overarching biblical theme of God’s clearly revealed and sovereign plan is essential not only for believers in Christ to make sense of the chaos in our world, but also for the church to know and fulfill its God-ordained role in this era of world history.”

Dr. Andy Woods became a Christian at the age of 16. He graduated with High Honors from the University of Redlands, CA., and obtained a Juris Doctorate (Whittier Law School, CA), practiced law, and in 1998, he began taking courses at Chafer and Talbot Theological Seminaries. He earned a Master of Theology degree and a Doctor of Philosophy in Bible Exposition at Dallas Theological Seminary.

Andy is the senior pastor at Sugar Land Bible Church in Texas, as well as author of several books including The Falling Away, Ever Reforming, and The Middle East Meltdown.

Most of us recall Jesus stating:

From that time Jesus began to preach and say, “Repent, for the kingdom of heaven is at hand.” Matthew 4:17 Are we currently living in God’s promised kingdom? Yes, say a plethora of professing evangelicals today. No, say the careful reading of the Bible and the biblical evidence marshaled by Dr. Andy Woods in THE COMING KINGDOM. The conclusions of this book are based on accurate interpretation of Scripture, which are then insightfully compared and contrasted with the various forms of contemporary evangelical teaching about the kingdom. Are you confused by conflicting views on the kingdom?

Do you long for something better than the current conditions you see in our world today? Then read THE COMING KINGDOM. This book shows convincingly from Scripture that the establishment of God’s theocratic kingdom on earth is still future and it will be vastly superior to the conditions we see in our world today. THE COMING KINGDOM clarifies for readers the biblical truth of God’s glorious kingdom, while exalting the coming King and edifying the soul of the reader with its constant appeal to God’s Word.

From that time Jesus began to preach and say, “Repent, for the kingdom of heaven is at hand.” Acts 1:3

He who overcomes, I will grant to him to sit down with Me on My throne, as I also overcame and sat down with My Father on His throne. 22 He who has an ear, let him hear what the Spirit says to the churches.’” Revelation 3:20-21

Pompeo’s statement on Israeli settlements is a diplomatic turning point

President Trump’s extraordinary gesture of support for Israel and the rights of the Jewish people was evident in the historic statement. The US has rightly concluded that falsely calling settlements illegal is not helpful for peace.

Monday will long be remembered as a turning point in Middle East history. US Secretary of State Mike Pompeo’s statement Monday that Israeli settlements are not illegal per se is the most significant shift in US Middle East policy in the past generation. Jerusalem’s status as Israel’s capital has been a matter of US law since 1996