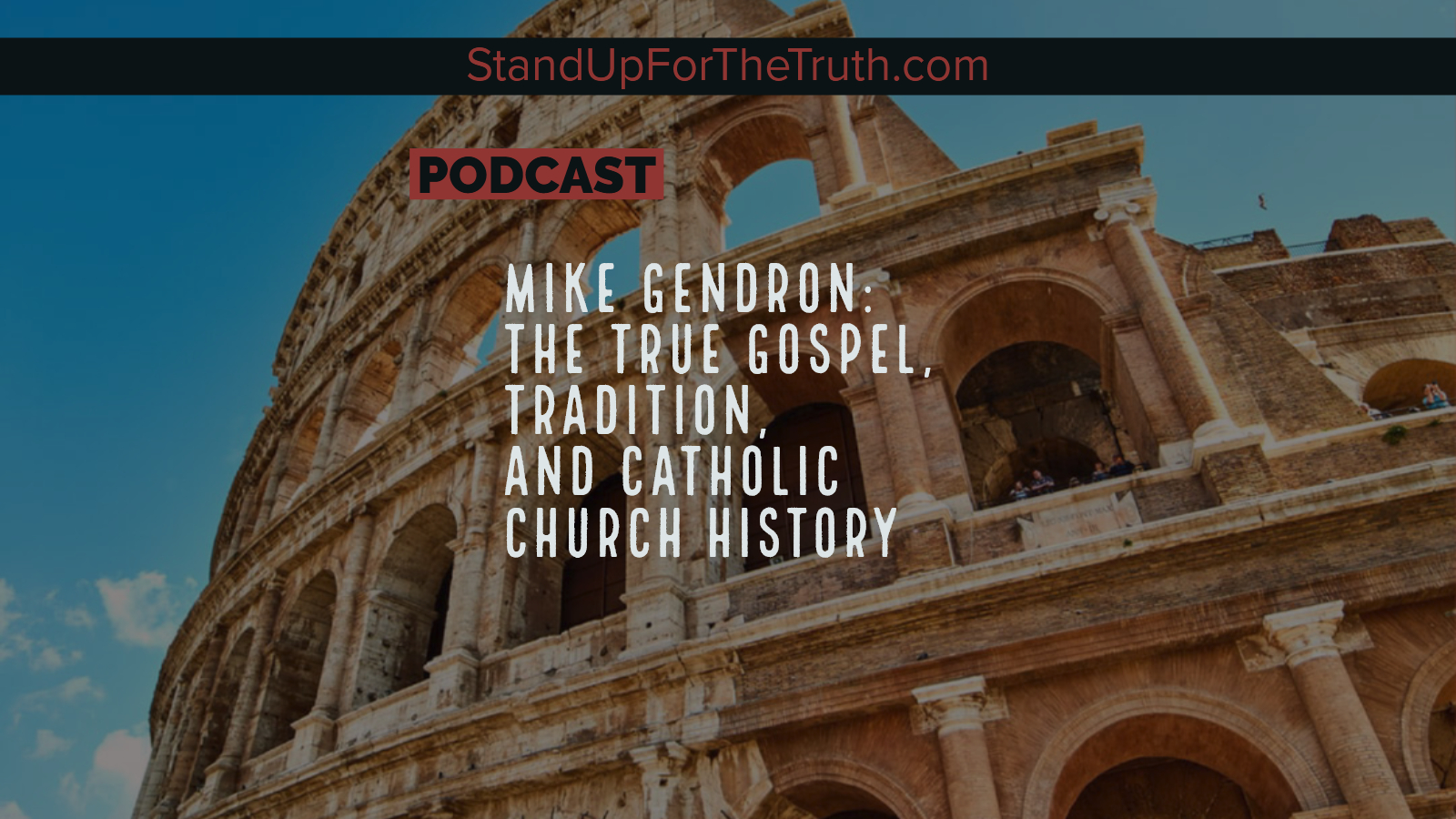 On today’s Stand Up for the Truth, our focus is evangelism and the truth of  God’s Word. Why so many religions and denominations? Nearly one in five people worldwide identify with the Roman Catholic Church. Many are serious practitioners while others have no idea what their church’s teachings include. But it is a very popular religion that feeds the need many people have to rely on good works.

The problem is they miss the importance of the authority of Scripture, the true gospel, and justification by faith.

Today’s guest writes: People are unconcerned about “so great a salvation” because they do not know the reality of almighty God’s divine justice towards sin or the sinner’s helpless and hopeless condition. As the eternal Creator of everything, God is holy and requires perfect obedience to His Law. Man has broken God’s Law, and the consequence for his sin is death and separation from God. People need to know that man can do nothing to save himself and that divine justice must be satisfied. This is why God sent His Son, Jesus Christ, as a merciful Lord who purchased full atonement for all who will turn to Him in repentance and faith.” Mike Gendron of Proclaiming the Gospel ministries, is a gifted evangelist and author of Contending for the Gospel and Preparing for Eternity. But for over 34 years, Mike was a devout Roman Catholic. That all changed in 1981 while attending an evangelical seminar when he realized the Bible is the supreme authority for knowing truth.

He exchanged his religion for a relationship with His all-sufficient Savior, preaches the gospel for a living, and hasn’t looked back.

Gendron states: “The writer of Hebrews asks the question, “How will we escape if we neglect so great a salvation?” (Heb. 2:3). Why are people so unconcerned about their eternal destiny? Are they too wrapped up in worldly pursuits to consider what our Creator has revealed through His Word?”

UNBIBLICAL TRADITIONS OF THE CATHOLIC CHURCH

On Mary or a priest as mediator

This is good and acceptable in the sight of God our Savior, 4 who desires all men to be saved and to come to the knowledge of the truth. 5 For there is one God, and one mediator also between God and men, the man Christ Jesus, 6 who gave Himself as a ransom for all; 1 Timothy 2:3-6

On assurance of salvation

No man can by any means redeem his brother
Or give to God a ransom for him—
8 For the redemption of his soul is costly,
And he should cease trying forever—Psalm 49:7-8

“Pope Francis has been successfully executing the Vatican’s well-defined strategy to create a one world religion. Now he is using his global influence and power to establish a one world government.”

“Let us sow the imperishable seed of God’s Word and pray it will find fertile soil in their hearts. As we engage lost people in conversations about “so great a salvation,” we must encourage them to believe the inspired Word of God instead of the words of uninspired men.”

“The authority of Scripture must be the leading principle when you witness, because Catholics have three authorities: they have the Word of God, their sacred tradition, and then the “infallible” teaching authority of the Church. We need to eliminate the second two and have them focus on Scripture alone. The second most important principle you’ve got to present to Catholics is Christ and all of His sufficiency. Jesus did everything necessary to save sinners completely and forever.”

NEW BOOK! Contending for the Gospel: For the glory of Christ and the sanctity of His Church There is an urgent need to defend the exclusivity and purity of God’s Gospel against the agents of compromise. It is time for Christians to stand firm on the Gospel, because many are being “tossed to and fro by the waves and carried about by every wind of doctrine, by human cunning, by craftiness in deceitful schemes” (Eph. 4:14).

We must contend earnestly for the faith for the glory and honor of our Savior, the sanctity of His Church, and the eternal destinies of those who are being misled.

So Great a Salvation – Mike Gendron

Not Ashamed of the Gospel

The Pope also highlighted environmental degradation and said the church was considering adding crimes against nature and the environment to the catechism—the official text of church doctrine and teachings.

“We have to introduce, we are thinking about it, in the catechism of the Catholic Church, the sin against ecology, the sin against our common home, because it’s a duty,” he said. Francis has been championed by climate activists for using his position to preach about the urgent need for humanity to recognize the dangers of human-caused global warming and calling on other world leaders—and the estimated 1.2 billion Catholics in the world—to act boldly to address the crisis.

Though there are some similarities, Islam is quite incompatible with the Bible as well as America, a society that values Judeo-Christian principles and religious freedom. Islam will accept no other religions, no competing economic or political views, and no legal system except Sharia Law which would outlaw Christianity.

Nowhere in the Bible does God encourage joining with other religions. On the contrary, He warns against it, punished the people of Israel for allowing the slightest pagan influence in their camp, and teaches about being set apart.

Pope Pius the Ninth said, “I alone, despite my unworthiness, am the successor to the apostles and Vicar of Christ. I alone have the mission to guide and direct the ship of Peter… (1870)

Vatican Council II – “This sacred synod teaches that the Church is necessary for salvation. Whoever, therefore, knowing the Catholic Church was made necessary by God through Jesus Christ, would refuse to enter her, or remain in her, cannot be saved.” (1960s)

Jesus said to him, “I am the way, the truth, and the life. No one comes to the Father except through Me. 7 “If you had known Me, you would have known My Father also; and from now on you know Him and have seen Him.” John 14:6-7