Rebecca Kiessling: What it Means to be 100% Pro-Life 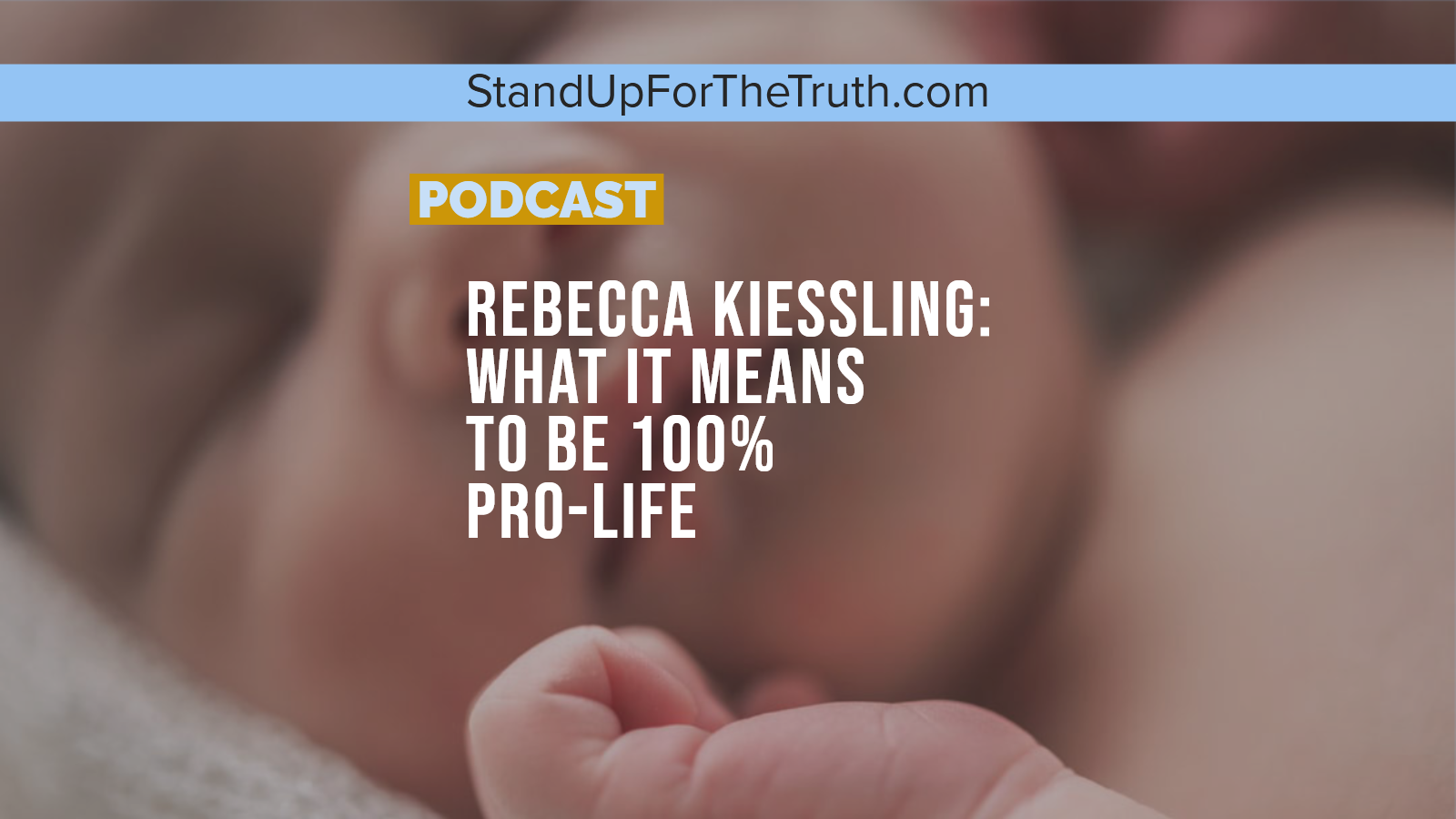 God speaks very clearly in Scripture on the subject of human life and the value of the unborn. It’s quite confusing why some Christians are still open to exceptions on abortion and others are proudly pro-choice. Even science and biology provide evidence for human life in the womb.


We know at conception, a person’s complete DNA is present – separate from the mother – and we know when a baby’s heart starts beating, when their organs are developed, and that babies can feel pain in the womb at 20 weeks. But today, we’re looking closely at the issue of rape victims and their children.

TODAY’S GUEST:  Rebecca Kiessling wasn’t born because she was “lucky,” she was protected by state law at the time in MI. She was conceived after her mother was raped. Are you pro-life – except in cases of rape? Think again! Since 1995, Rebecca has been an international pro-life speaker; she is also an adoption advocate and actively promotes 100% pro-life legislation.

She is the Director of Save the 1, and co-founder of Hope After Rape Conception. Rebecca is also a National Spokeswoman for Personhood USA, and she’s helped pregnant rape victims all around the world to choose life for their children. She’s also an attorney, wife, and mother of 5 – including two adopted children.

Rebecca hopes to educate people on why all pre-born children should be protected by law and accepted by society, without exception and without compromise. Further, she hopes to educate prolife advocates, legislatures, leaders, and clergy on how to articulate a proper defense of children conceived in rape or incest, as well as those with special needs.

“See that you do not despise one of these little ones. For I tell you that their angels in heaven always see the face of my Father in heaven. What do you think? If a man owns a hundred sheep, and one of them wanders away, will he not leave the ninety-nine on the hills and go to look for the one that wandered off? And if he finds it, truly I tell you, he is happier about that one sheep than about the ninety-nine that did not wander off. In the same way your Father in heaven is not willing that any of these little ones should perish.” Matthew 18:10-14

What God’s Word Say About Abortion

Pro-abortionists try to “dehumanize” unborn children by referring to them as merely “lumps of tissue” or “products of conception”; however, biblically, as well as biologically, you and I are unique human beings from the moment of conception. The result of conception (the “product” that is conceived) is known as a baby, as Scripture (and science) tells us…

What is Your Firstborn Worth? – David Fiorazo

Naturally, the awards show audience applauded Williams for her “courage” to preach about being pro-abortion – as she stood there pregnant, mind you. The message was clear: Williams would not have won her Golden Globe if she didn’t get an abortion, and women must do the same if they want a shot at fame and success!

What could go wrong?

“A high school senior decided recently that she wants to become sexually active with her boyfriend. But she is not yet comfortable talking to her mom about birth control and would be unable to get to a doctor’s appointment on her own. Instead, she walked over to the new well-being center at school during a free period,”

Pro-Life Except in Cases of Rape? (Our previous interview with Rebecca on Stand Up for the Truth)