Dr. Erwin Lutzer: We Will Not Be Silenced

Today’s Guest: Dr. Erwin Lutzer is an evangelical pastor, teacher, speaker, and author of over 50 books. For 36 years, he was the senior pastor at The Moody Church in Chicago; He earned a B.Th. from Winnipeg Bible College, a Th.M. from Dallas Theological Seminary, an M.A. in philosophy from Loyola University, and an honorary LL.D. from the Simon Greenleaf School of Law. Dr. Lutzer produces several Christian radio programs, including The Moody Church Hour, Songs in the Night, and Running to Win. In 2018, his television production of A Call for Freedom, which traces the history of the Protestant Reformation, won three regional Emmy Awards. Dr. Lutzer and his wife, Rebecca, live in the Chicago area. They have three grown children and eight grandchildren.

We Will Not Be Silenced: Responding Courageously to Our Culture’s Assault on Christianity by Dr. Erwin Lutzer 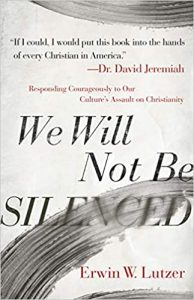 “If I could, I would put this book into the hands of every Christian in America.”
—Dr. David Jeremiah

“Be strong and courageous. Do not be frightened, and do not be dismayed, for the LORD your God is with you wherever you go” (Joshua 1:9).

Each day, you watch America turn further from Christian values and the core principles of liberty. It’s frustrating to feel you can’t assert biblical truth without facing condemnation, and fearful to witness outrage and victimhood replace respect and reason. Amidst this dissent, how can you not only stay rooted in your own faith, but continue publicly testifying for Jesus?

In We Will Not Be Silenced, Dr. Erwin W. Lutzer prepares you to live out your convictions against a growing tide of hostility. Gain a better understanding of nonbelievers’ legitimate hurts and concerns regarding issues like racism, sexism, and poverty—and identify the toxic responses secular culture disguises as solutions. In the process, you’ll see how you can show compassion and gentleness to those outside of the faith without affirming their beliefs.

We Will Not Be Silenced will ready you to move beyond fear and boldly accept the challenge of representing Christ to a watching world that needs Him now more than ever before.

Where is the Church Headed? in America

Did God Use Evolution as His Process of Creation?

Watching the Watchers and Q & A