Today on Stand Up For The Truth, Host David Fiorazo speaks with guest Paul Blair on the state of the American church, the Rona, big government, and Biblical Justice vs. Social Justice. They discuss how every individual has unalienable rights, because we are created in God’s image, verses the Marxist Critical Theory. 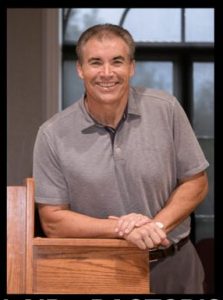 Paul Blair, Senior Pastor of Fairview Baptist Church in Edmond, Oklahoma since 2001. He speaks nationwide about God in Government, as well as Apologetics and a Biblical Worldview. He serves on the Board of Directors for Bott Radio, and the Oklahoma Apologetics Alliance.

Pau was drafted by the Chicago Bears in 1986 playing under Coach Mike Ditka and alongside Hall of Famers Walter Payton, Dan Hampton, and Mike Singletary. At the age of 37, Paul Blair was called into full-time ministry. His passion is for the salvation of souls and also the restoration of Godly morality and decency in America. He’s been a featured guest on the Glenn Beck TV Show, AFA Radio, the Mike Gallagher Radio Show, Focus on the Family Radio, Washington Watch with Tony Perkins, and many others.

In 2008, Pastor Blair was one of the original 33 pastors that worked with the Alliance Defense Fund on Pulpit Freedom Sunday challenging the constitutionality of the 1954 Johnson Amendment. The number of pastors participating has increased every year since with over 1600 participating in 2012. Following the 2012 Pulpit Freedom Sunday, the IRS admitted that churches are tax exempt and do not require approval or a letter of exemption from the IRS. He’s an author, and President of Reclaiming America for Christ and founder of Protect Life and Marriage OK.  He is also a member of the Council on National Policy. He and his wife Cindy, have two sons, Joshua and Jacob.

Christian Student Group Cannot Be Punished for Requiring Its Leaders to Be Christians, Judge Rules